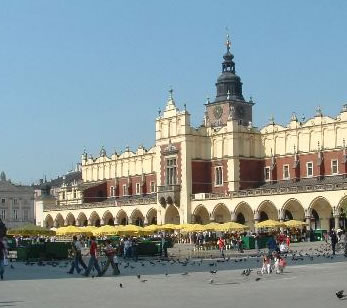 
Day 1 & 2 - We meet at our dedicated Departure Office at St Pancras, we travel to Brussels and on to Hanover, where we overnight. The next day we leave Hanover and travel onwards to Berlin and Poznan by rail and coach, arriving in Wroclaw in the afternoon.

Day 3 - This morning we enjoy a boat trip on the River Odra. In the afternoon, we take a walking tour of Wroclaw, which is known for its canals, the River Odra and over 100 bridges. The oldest part of the city is Ostrow Tumski Island, with its stunning cathedral. Across the river are the Baroque university and the Old Market Square, home to the Gothic City Hall and some magnificent burgher houses.

Day 4 & 5 - Today we travel by train (standard class) to the unspoilt city of Krakow, one of central Europe's real hidden treasures. We check in to the Hotel Niebieski or Best Western Q Hotel Krakow (depending on departure date). The city is filled with beauty, much of it original as Krakow survived World War II largely unscathed. The skyline of Krakow is filled with towers and spires - part of a city-wide display of architectural diversity, where 1,000 years of changing influences have left behind fantastic examples of Romanesque, Gothic and baroque style. At the heart of the city is the largest fully-intact medieval square in Europe, dominated by the elaborate St Mary's Church. Every hour a trumpet sounds from the main tower, commemorating a bugler who was shot here in 1241.

The narrow cobbled streets of the city's Old Town are packed with treasures, many of which we discover on our afternoon walking tour which includes Wawel Hill, home to the castle where Polish kings lived and the cathedral where they are buried. Day 5 Today is free for you to spend at leisure in Krakow, one of the bestpreserved medieval cities in Europe. Our hotel is a short walk from the large, medieval Market Square. Its centre is dominated by the 16th century Sukiennice (Cloth Hall).

Day 6 - This morning we board a coach to the Polish town of Oswiecim, the town the Germans called Auschwitz. Here we take an emotional, moving tour of the Auschwitz-Birkenau museum; Nazi Germany's infamous concentration camp that has been preserved as a permanent memorial and poignant reminder of the crimes against humanity that were perpetrated here. We visit both the original camp 'Auschwitz I', where prisoners would enter under the chilling 'Arbeit Macht Frei' sign, as well as 'Auschwitz II: Birkenau', the larger and more recognisable camp where the original railway and platform remain to this day.*
*We appreciate that this excursion may not be for everyone. Feel free to spend a day at leisure in Krakow if you so choose.

Day 7 - We leave Krakow by coach and head to the Salt Mines of Wieliczka, the oldest operational mines in Europe and now a UNESCO World Heritage monument. Here we take a guided tour of the intricately carved underground chambers, including a magnificent cathedral and a statue of Pope John Paul II, Krakow's favourite son. Everything we see within the mine is the handiwork of the original salt miners. This evening we enjoy a short walk through Krakow's Jewish District, passing several of the synagogues that were once the thriving centre of life for a previously much larger Jewish community. For dinner we dine at a local Jewish restaurant, a fascinating and delicious insight into the cuisine and culture of the Polish Jews.

Day 8 - Today we travel north to Warsaw (standard class Rail) where we check into the Intercontinental Hotel for a three night stay. The city of Warsaw, home of Frédéric Chopin, has many fine examples of imposing Stalinesque architecture, grand, wide avenues and expansive parks. The historic centre of Warsaw is just a short distance from our hotel and contains many picturesque buildings, almost all of which have been painstakingly and lovingly restored using the original stone and guided by 18th century paintings by Bellotto.

Day 9 - We enjoy a fascinating sightseeing tour of Warsaw today, including Castle Square, King Sigismund's Column, St John's Cathedral and the Old Town's Market Square. Warsaw is positively brimming with history and architecture, it really is a delight to discover all of its charms.

Day 10 - Spend your final day in Poland at leisure, you are free to further explore Warsaw in your own time and may wish to take a stroll through Lazienki Park to Chopin's Monument. Alternatively, our hotel is well-placed to explore the Old Town, with its Royal Route, Castle and Market Square all nearby.

Day 11 - Our final day in Poland, you are free to further explore Warsaw at your leisure. That evening, we rail to the German capital of Berlin.

Day 12 & 13 - Today we embark on a guided tour of Berlin. On Day 13 we travel home via Cologne and on the Eurostar to London.

All prices are per person and assume full occupancy of the room.


Andel’s Hotel, Berlin
The 4-Star superior Andel's Hotel in Berlin is situated in the heart of the city, close to the historic Alexanderplatz. This modern, stylish hotel has two restaurants and a brasserie, as well as a Sky Café and Sky Bar on the 12th and 14th floors respectively, both of which offer fantastic views over Berlin. There is also a spa with a fitness area, whirlpool, steam bath and saunas, and a selection of relaxing therapies and treatments are available (pay locally). All rooms come with individual climate control, telephone, television, DVD player, minibar, safe, tea and coffee making facilities, hairdryer and complimentary Wi-Fi internet access.

Hotel Metropolis
In Krakow we stay at the 4-Star Hotel Metropolis, close to the picturesque Wisla River and only a 13 minute walk from the citiy's main square.

InterContinental Warsaw
Occupying one of the tallest buildings in the city, the 5-Star InterContinental Hotel is a landmark building in the centre of Warsaw. The hotel has three restaurants and two bars, as well as the 'Riverview Wellness Centre' which has a swimming pool, sauna, steam room and spa (with massage and beauty treatments available - payable locally). Room facilities include satellite TV, minibar and tea/coffee making facilities.

Park Plaza, Wroclaw
In Wroclaw, the 4-Star Park Plaza is well-placed for the city's sights, within walking distance of the city's Old Town. The hotel has a restaurant and fitness club. Rooms feature air conditioning, television, telephone, minibar, tea and coffee making facilities and hairdryer.

The Park Plaza is popular amongst our customers - in 2009 and 2012 it won the Great Rail Journeys award for best hotel in Scandinavia, Eastern Europe and Russia, and in 2010 the hotel won our Gold Award for its outstanding customer service.

If you would like more information on this offer or would like to request that we book it for you, then please don't hesitate to get in touch. You can give us a call or if you would prefer to make your enquiry online you can fill in the form below and click the button at the bottom to send us an email. The details of the offer you have selected will be sent to us automatically, however to aid your quote please put the number of passengers (adults & children) and your preferred departure point in the comment box below. - Thank you.

Remember! All offers are subject to availability.

Offers are subject to availability.