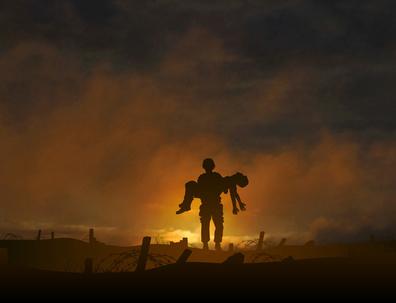 "D-Day Landings in Normandy - By Coach"
See the landing beaches and battlegrounds, military cemeteries and museums of the single biggest invasion force ever assembled.

There are departures on most Mondays (5 days) and Fridays (4 days) throughout the year.

Based on 2 adults sharing. Single rooms available at a supplement. On selected tours, children 8-17 are half price.

Day 1 - Local departure by coach, then to Caen in Normandy for a three-night stay.

Day 2 - Britain’s D-Day: Pegasus Bridge and British Beaches - We start at Pegasus Bridge, the scene of the first actions of D-Day where Airborne troops stormed the position from gliders and held on until the link-up with ground forces from Sword Beach was made. We see where the gliders landed, the Gondrée Café – arguably the first house liberated on D-Day – and visit the Memorial Pegasus Museum where the original bridge is located. In Ranville we see the Airborne graves and after lunch, proceed into the British landing beaches, starting at Sword Beach. At Juno Beach we visit the superb Juno Beach Centre which explains the story of the Canadian role in the Battle of Normandy, and at Gold Beach, see where some of the heaviest casualties were suffered by British troops storming the tough defences at Asnelles. We end the day at Arromanches where the Mulberry Harbour was constructed, much of which is still visible out to sea.

Day 3 - America's D-Day: Bloody Omaha and American Airborne - The story of ‘Bloody Omaha’ and the terrible American sacrifice here on D-Day has been immortalised in 'Saving Private Ryan'. Uncover the real story with a visit to the American Normandy Cemetery and Omaha Beach where the landings took place, seeing the memorial to the 29th Division. We also take time to visit the newest Normandy war museum, the superb Overlord Museum-Omaha Beach before taking lunch in St. Mere Eglise, and then looking at the story of the US Airborne forces at the new Richard Winters Leadership Memorial; Dick Winters commanded Easy Company of 506th Parachute Infantry Regiment, otherwise known as ‘Band of Brothers’. At Utah Beach we follow the story of the successful landings and visit the expanded Utah Beach Museum. We end the day at the German Cemetery at La Cambe, where German Tank Ace Michael Wittmann is buried among thousands of others who fell in Normandy.

For 5 day tours, Day 4 includes the Battle of the Bocage:Falaise Gap with a return home on Day 5. Please ring for more details.

You will stay for three or four nights at either the 2-star Kyriad Caen Sud-Ifs or the 2-star Hotel Carline Caen Nord, both situated on the outskirts of Caen. Both hotels have a bar and restaurant, and the Hotel Carline has a lift. The Kyriad has no lift, but rooms are only on two floors.

Due to demand, other hotels of a similar standard may be used.