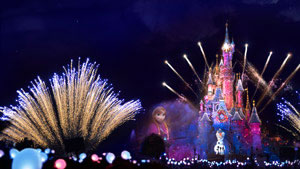 On New Year's Eve the Disneyland Park hosts an all-out celebration. Bring in the New Year with the most memorable and magical New Year Celebration ever.

With more than a million Christmas lights throughout the Resort, there is no other place more magical, more family friendly and more fun to spend the New Year. Mingle with the many other excited revellers and experience the yuletide festivities as Main Street, U.S.A®, is magically transformed into a winter wonderland of snowy streets, illuminated with shimmering street lamps.

On New Year’s Eve the Disneyland® Park hosts an all-out unforgettable celebration, climaxing with a magnificent fireworks extravaganza above Sleeping Beauty’s Castle, the Park’s dazzling centrepiece, to welcome in the New Year
.

Rooms sleep maximum of 4 persons plus 1 infant (subject to availability). Child prices subject to sharing a room with 2 adults. Child age is 3-11 inclusive. Infants (aged 2 and under) £99. Single room supplement £109 pp. Please note: We cannot accept any responsibility for the cancellation of any planned celebrations, for any reason, notably due to inclement weather conditions.

Day 1 - Paris. Journey to your hotel.

Day 2 - Disney. (New Year’s Eve) After a leisurely breakfast, we include coach transfers to Disneyland Paris. A one-day Park Hopper Ticket is included allowing entry to both Disney Parks. (The optional New Year’s Eve Disneyland Park Exclusive Party is not included, see what's extra below for cost). Return transfer to your hotel at 1am.

Day 3  New Year’s Day A day at leisure or after a leisurely breakfast choose from either an optional excursion to Disneyland Paris, an optional Paris City Visit and optional River Seine Cruise.

You will stay for three nights at a hotel located in the Greater Paris area and within easy coaching distance of Disneyland Paris. All hotels used have well-furnished en-suite bedrooms as well as a bar and a restaurant where continental breakfast will be included on each morning of your stay.

Paris & River Seine Cruise (Day 3) - If you prefer to spend New Year's Day in Paris, rather than a second day at Disneyland Paris, this optional excursion in to Paris, which includes a one-hour River Seine cruise provides a great way to see the sights - Adults £15 - Child £10

Exclusive access, New Year's Eve Party in Disneyland Park - The brand new, special New Year’s Eve Party will take place at Disneyland Park from 7pm to 1am. Access to Disneyland Park during the evening is only from this special ticket. The not-to- be-missed entertainment of the event is a giant parade with floats from many Disneyland Paris parades: from the brand new 25th Anniversary parade, to the previous parade Disney Magic on Parade, the Christmas or Halloween ones and even the parade from the Walt Disney Studios, Stars’N’Cars! An incredible show is in store, with plenty of Characters and performers.

You will also have the opportunity to meet many Characters, including ones who will be in special outfits for this unique occasion. As a new year must be welcomed with music, there will be dance floors so that the whole family can boogie the night away. Many other surprises await you before the night comes to a spectacular close with breathtaking fireworks above Sleeping Beauty Castle.

Please note: Every effort will be made by Disneyland Paris to ensure that all advertised facilities are available. However certain shows, parades, attractions, entertainment, shops and restaurants may be closed, modified, delayed or cancelled without prior notice, notably due to inclement weather conditions.