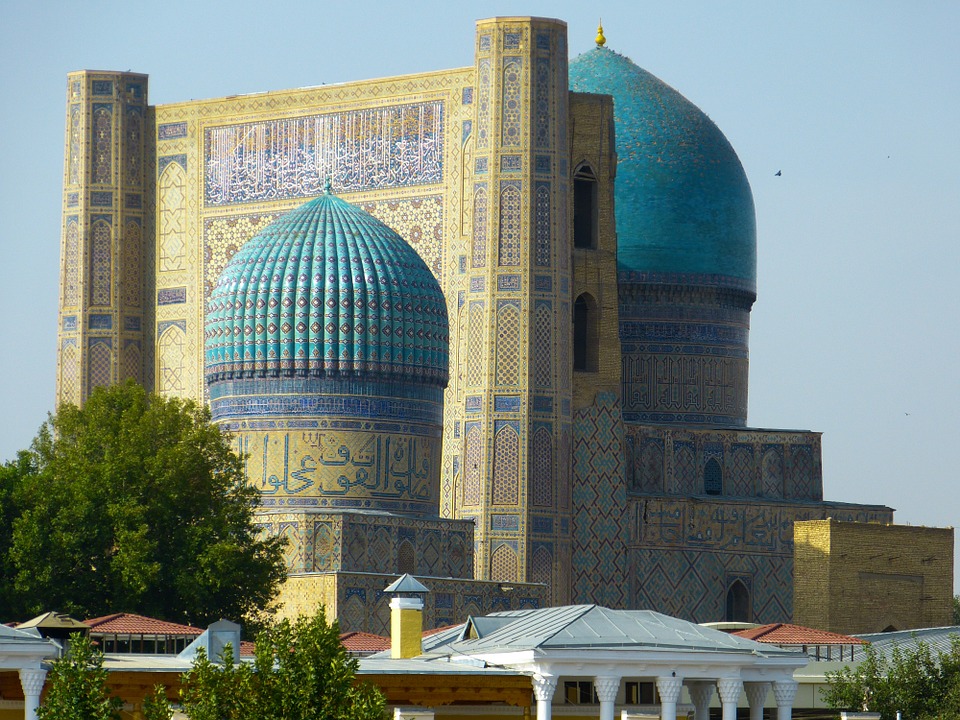 Samarkand. Bukhara. Khiva. The names conjure up images of ‘Arabian Nights’, Eastern exoticism and caravans crossing the Red Desert to bring silks, spices and jewels to the bazaars of the Near East. Our journey through Uzbekistan follows the Silk Road route, exploring the mosques, palaces, museums and madrasahs of these crossroad cities. Our adventure also takes us through the dramatic desert scenery of remote Karakalpakstan and reveals the grand tombs of the Biblical prophet Daniel and medieval warrior-emperor Tamerlane.

Day 1 UK - In flight: VIP door-to-door travel service collects you from home for your overnight flight to Tashkent.

Day 2 Tashkent: Upon arrival this morning, we transfer to the Wyndham Tashkent Hotel, where there is time to relax before lunch at a local restaurant, followed by a guided sightseeing tour of the city. Visit the remarkable Khast-Imam Complex, which includes the 16th century Barak-Khan Madrasah, the Mausoleum of Abu Bakr Kaffal Shashi and the Tillya-Sheykh Mosque. We will also visit the Museum of Applied Art and the traditional Chorsu Bazaar. Dinner this evening will be at a local restaurant.

Day 3 Tashkent - Nukus: We have an early breakfast at the hotel this morning, before transferring to the airport for a flight to the city of Nukus, known as Uzbekistan’s northern capital. Upon arrival, we transfer to the Hotel Jipek Joli (3T). This afternoon we will enjoy a tour of the city, including a visit to the Savitsky Art Museum, which houses the world’s second-largest collection of Russian avant-garde art, alongside Soviet-era Socialist Realism and a host of archaeological treasures. Also on the itinerary is the ancient Mizdakhan Necropolis, one of the oldest pilgrimage sites of Karakalpakstan, and the ruins of the Gyaur-Kala Fortress, which dates back to the 4th century BC. Dinner this evening will be at a local restaurant.

Day 4 Nukus - Khiva: After breakfast, we transfer by coach to the walled city of Khiva. Along the way we visit Chilpyk, the ‘Tower of Silence,’ which was used in Zoroastrian funerary rituals, the ruins of the ancient settlement of Tuprak Kala, and Ayaz Kala, where we have lunch in a traditional yurt camp. We continue onwards to Khiva and the Asia Khiva Hotel (3T) or similar, where we have dinner this evening.

Day 5 Khiva: This morning we enjoy a guided tour of Khiva, a historic Silk Road city famed for its elegant architecture, its mosques and soaring minarets, tiled walls and narrow lanes. Within the medieval Itchan Kala, the walled ‘inner town,’ we’ll find the 18th century Djuma Mosque, where the ceiling is supported by 212 wooden columns, the Tosh-Hovli Palace, with its ornate ceramic-tiled walls, the vast Kuhna Ark fortress, once the official residence of Khiva’s rulers, and the beautiful Pahlavan Mahmud Mausoleum. We have lunch at a local restaurant, while tonight’s dinner will be accompanied by a live folk show.

Day 6 Khiva - Bukhara: We leave Khiva after breakfast, crossing the dramatic landscapes of the Kyzyl Kum, or Red Sand Desert, along the route once taken by the Silk Road caravan traders towards the fabled city of Bukhara. We stop for lunch along the way, arriving in Bukhara this afternoon and check into our hotel for the next three nights, the Asia Bukhara, or similar. There’s time to settle in and relax before heading out to a local restaurant for dinner.

Day 7 Bukhara: Following breakfast at the hotel, we join a guided city tour of the old town of Bukhara, an ancient Silk Road trading hub and important cultural centre, now a UNESCO World Heritage Site. Amongst other highlights, we visit the grand 16th century Kalyan Mosque, the 10th century Ismael Samani Mausoleum, the Abdul Aziz Khan Madrasah, covered in multi-coloured ceramic tiles, and the beautiful, turquoise-domed Mir-i-Arab Madrasah, looking like an image from the ‘Arabian Nights’. This afternoon you are free to make your own explorations, perhaps browsing through the souvenirs in the bazaars or relaxing in one of the city’s tea houses. This evening we have dinner at a restaurant, where we join a traditional Bukharian cooking master class and learn about the unique regional cuisine, a fusion of Jewish and Central Asian traditions.

Day 8 Bukhara: We head out of the city this morning to visit the Bahouddin Nakshbandi Mausoleum, an elegant memorial and shrine dedicated to the 14th century Sufi scholar, and Sitorai-Mokhi-Hossa Palace, once the summer residence of the local emirs, built at the beginning of the last century. We return to Bukhara and the afternoon is free. Early this evening we meet for the short walk to the Nadir Divan Begi madrasah where we enjoy a traditional dinner followed by a folklore show.

Day 9 Bukhara - Samarkand: After free time this morning to explore the city, we leave for the railway station this afternoon, to board a train for Samarkand. Founded in the 7th century BC, it was once the capital of a great empire ruled by the legendary warlord Tamerlane, and one of the most important cities along the Silk Road. Today, this ‘Crossroad of Cultures’ is a UNESCO World Heritage Site. We arrive and transfer to the Hotel Grand Samarkand Superior (3T+), or similar. Dinner is at a local restaurant this evening.

Day 10 Samarkand: Today we enjoy a full-day sightseeing tour of Samarkand, visiting the Gur-e-Amir Mausoleum - the elaborate tomb of the 14th century emperor Tamerlane, and the vast Registan Square, the heart of the medieval city, where we will find impressive buildings such as the mosaic-covered 15th century Ulugh Beg Madrasah, 17th century Tillya-Kori Madrasah and the Bibi-Khanym Mosque, as well as the Shah-i-Zinda necropolis, an imposing complex of 11 medieval mausolea. We sample some traditional Samarkand cuisine with lunch and dinner at local restaurants.

Day 11 Samarkand - Tashkent: There’s more time to explore Samarkand today, with another guided tour, visiting sights including the fascinating 15th century Ulugh Beg Observatory, the archaeological treasures of the Afrosiyab Museum, and the Mausoleum of Daniel, said to be the tomb of the Old Testament prophet and a pilgrimage site for Muslims, Christians and Jews. This afternoon we transfer to the railway station for our journey back to Tashkent, and the Wyndham Tashkent Hotel (4T). We enjoy a final gala dinner at a local restaurant.

Day 12 Tashkent - UK: After breakfast we check out of our hotel and take a guided walking tour of Tashkent, visiting the History Museum, Independence Square, the Amir Temur Monument and the richly decorated Tashkent Metro. This afternoon we transfer to the airport for your return flight to the UK. Upon arrival, your Titan vehicle will be waiting for the journey home.

How much deposit will I need to pay - When you make your booking you are required to pay the deposit amount of £195 per person or 10% of the holiday price - whichever is greater. However some specialist tours do require additional deposit levels.

A Visa is required but is NOT included in the price.

Please note: This holiday includes many areas of steep gradient, with difficult and uneven steps often without handrails or disability slopes, and is therefore not suitable for anyone with walking difficulties.